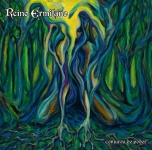 This band from Lima, Peru performs Doom with a significant ’70s Rock influence that, together with ”Conjuros De Poder”, has released five albums. Predecessors were ”Reino Ermitaño” (2003), ”Brujas Del Mar” (2006), ”Rituales Interiores” (2008) and ”Veneración Del Fuego” (2013). REINO ERMITAÑO consists of guitarist Eloy Arturo, which you might know from KRANIUM, drummer Julio "Ñaca" Almeida (also TORTUGA, Mazo, ex – JERUSALEM), bassist Marcos Coifman (ex – TLÖN) and vocalist Tania Duarte. The last one sounds like a witch chanting her spells over you in the Spanish language. They formed a contrast with the heavy production and even though they’re plain out of tune at times, they play a keyrole in the coolness of this band and a huge part in the occult atmosphere of this record. Everything gets stylish ornamented with excellent solos and even some demonic vocals pop up. Comparisons with BLACK SABBATH, SAINT VITUS aren’t hard to find but REINO ERMITAÑO doesn’t rip anyone off. The record clocks almost 51 minutes and with (sometimes very) long passages plus sometimes not that strong riffs it’s a long trip and the impression grew that this album works played in a dark enviroment being in the appropriate intoxicated condition, but that’s up to you. This is pretty spiritual stuff and not easy to digest, but with tracks like ’Circle’, ’Chancapiedra’ or the folky closing one ’Ap·Trida’ not bad at all. Again, it’s up to you. For more info www.facebook.com/pages/reino-ermitaño/229687576031, ogrodoom666@gmail.com, www.ihate.se