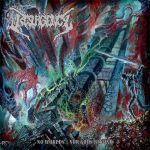 The Greek RESURGENCY deliver with "No Worlds… Nor Gods Beyond" their second full-length. After the well received debut "False Enlightenment" from 2012 this band released a demo called "Dark Revival" and a split with the Swedish DESOLATOR in 2011. Compared to "False Enlightenment" there hasn’t much changed in style. The production on "No Worlds… Nor Gods Beyond" however is cleaner and unfortunately less heavy than on its predecessor. Especially notable in the sound of the drums. The guitars could have been more upfront, considering their role in general. Apart from that, this is a solid and brutal old school Death Metal record with plenty of dynamics. The intensity reminded of albums like "Dreams Of The Carrion Kind", "Sothis" or "Screams Of Anguish". The vocals of John P. seemed like a mix of SINISTER and SUFFOCATION. Also musicwise there are also some parallels here. Notable element, apart from the frantic drumming by George Tarkas who you might know from MASS INFECTION, are the chords. Every song houses many riffs that are extreme venomous like you hear in Thrash Metal, thanks to the songwriting by George T. and Tolis B. (just listen to ‘Permutation Rites’, ‘Through The Gate Inside Not’ or ‘Quartered Mental Existence’). The music on "No Worlds… Nor Gods Beyond" is nothing new, but the energy with which its executed make it sound fresh and remarkably fierce. And this stuff gets better with every spin. In case you’re a fan of the bands / albums mentioned here… don’t hesitate and put this on your shopping list. Check and listen first on www.facebook.com/pages/resurgency/150010435055711, www.fda-records.com