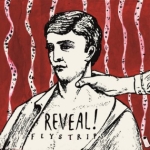 One look at the cover art and nothing makes sense. Then the label that is releasing this, Sepulchral Voice Records, responsible for such heavy weights like NECROS CHRISTOS or NECROVATION… not to mention the name of the band. Add to that a previous EP with a cat, yes an adorable orange cat on the cover… so, is this supposed to be taken seriously? Well, let the music speak… and well, more or less, yes this is definitely out of place and the visual and lyrical aspect has very little to do with the music. REVEAL plays some sort of minimalistic at times Black / Thrash with a lo-fi production value, with a somewhat thin guitar sound and yet, for some strange forces, it works. It reminded me of MORBUS CHRON with lesser production values, but in a similar style. Yes, the references to 70s Psychedelic Rock are there. Also a lot of early blackened Punk in the BATHORY debut album era is here. After a few listenings, and being really mind-travelling, to me this is the bastard child of a 90s Black Metal musician that somehow traveled in time to the 70s and joined a Progressive Rock acid band of that era. These Swedish musicians are no newcomers, they existed with another band name since 2006. This is the kind of band one loves or hates, there is no middle ground here. For me, it is quite good and different, whilst not heavy per-se it is very interesting and definitely a band to listen to in some sort of mind alteration to understand it better. While I do not find the visual aspect to be coherent, the music proves otherwise. At times this is like the soundtrack of one low-budget horror film from the 70s. Yes, it sounds evil and twisted. Not ordinary I might add, but in the end it all works. Something that I recommend you to experience, whether you like it or not, you will not be the same from that moment forwards. You have been warned! www.facebook.com/revealswe, www.sepulchralvoice.de