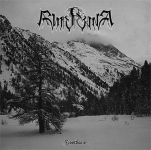 Sometimes the cover art itself will give you an idea of what you are about to listen… and in this case, the word “cold” is the only one that comes, yet it also shows “calm". Add to that the quite very good intro with acoustic guitar and chilling wind sounds in the background and then enter the fast Black Metal epic attack! This German duo offers a good melodic and epic music comparable to a faster DISSECTION meets early IMMORTAL. Yes, they have that grim approach, yet it is still melodic and well played, and has a good taste in doing different tempo changes. One thing to notice is the quite long songs they do. The guitar tone in particular reminded me of a slightly thinner DAWN and at some extent to early BURZUM, in the fact the way it sounds “icy” yet it clearly shows the melody while keeping it aggressive. Still, I would have liked a bit more of heaviness in the guitars. Yet, it is a very enjoyable album, which also recalls at time the atmospheres of MAYHEM from that album of the old book never found. A very competent drummer is also something to notice here. And as epic it started, it also ends with a similar sounding outro as their intro. Fans of the style have not to think twice about getting this one. www.rimruna.de