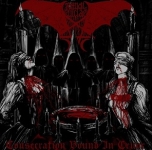 RITUAL SUICIDE is a band from the Ukraine that’s so kvlt that they don’t even have a Facebook page, they don’t want their stuff to be available digitally or promotion of any kind. If you ask me, that’s promotion in itself, no matter how ridiculous and lame, but promotion nonetheless. Anyway, "Consecration Bound In Cruor“ is the re-release of a tape from 2013 on Black Gangrene Productions, (in)famous for shabby Les Légions Noires re-releases. And couldn’t you have guessed, RITUAL SUICIDE draw massive influence from LLN beasts such as MÜTIILATION or BELKÈTRE or any of those bands with names that look like someone’s head dropped on the keyboard. In other words: lo-fi as fuck, the most minimalistic riffs imaginable and a rhythm section that redefines the term sloppiness. But while those LLN bands were really shrouded in mystery and drama and could write damn fine tunes, RITUAL SUICIDE just try hard, way too hard. The songs are somewhere between not even 3 minutes on one hand and close to 10 minutes on the other, and neither go anywhere. It’s either "ambient“ interludes of the most boring kind that will even give Varg Vikernes circa 2017 a hard run for his money or off-key noise attacks. And while there is absolutely nothing wrong with necro sound, even with noise per se, this is just… childish. Song titles like ‘Return To Walachian Battlefields’ don’t help either, if it sounds as if a victim of muscle dystrophy was too weak to even lift a plastic sword. It’s all paint by the numbers Black Metal, only that RITUAL SUICIDE got their numbers all wrong. I wouldn’t mind if they’d take their band name seriously… www.foreverplaguedrecords.com