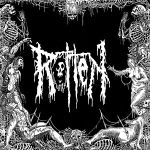 After all these years of being immersed into Metal, I have created my own expectations of bands based on different characteristics. One of them being the country where bands are from. I think that based on this and the sub-genre the band plays, I can expect a certain sound. France, for example, has some of the best and weirdest Black Metal acts I have encountered in years. Same goes for Death Metal, as french tend to stay away from the well known marks and clichés of the this style of music. So when I first requested to do a review for the french Death Metal act ROTTEN, I was expecting music heavily influenced by LOUDBLAST, MASSACRA and AGGRESSOR, just to name a few. But I was totally surprised upon first listen. ROTTEN live up to its name. These guys have crafted some amazingly heavy music that only can be translated as thick swamp ridden filth, in the good way of course. The production is so organic and natural. The guitar tone reminded me of the old pre – NWOSDM Scandinavian bands combined with lots of 80s Punk and D-Beat. The riffs are straight to the point, similar to what SLAUGHTER did in their first album, catchy yet brutal, followed by one of the best buzzsaw bass tones I’ve heard in some time, as if Will Rahmer or Stevo were playing. Although the drum sound is huge and natural, the performance is not as inventive as I would have liked, but it fits perfectly to the music. Rounding it up, the vocals are good and varied, from deep growls to mid range grunts but keeping everything in the low end of the spectrum. The mix is good and up in your face. In my personal opinion, the vocals kinda kick you in the face and sometimes they overpower the music. Everything is so loud, yet the dynamics are not totally lost, which could be something they can improve in their follow-up. So ROTTEN doesn’t come up as a technical band. They go for the throat in terms of simplicity, heaviness and total annihilation. Just like being slowly dragged by murky, pungent quicksands. And they do it perfectly. My only concern is that, although I liked their material, sometimes they come as a little too "old school blueprint" to my liking. Maybe if they can work on their identity and add a lot more of their own sound, ROTTEN could be even better. Anyway, this is great stuff. If you like quality Death Metal this is a worthy addition to your collection. If you are an 80s Death Metal maniac, this will just make you go totally bonkers. Especially because the OBITUARY cover that they play (‘Til Death’ off the "Slowly We Rot" album) is right on point. Check them out here: www.facebook.com/deathrotten. And get their stuff from the label here: www.facebook.com/bleedrecords