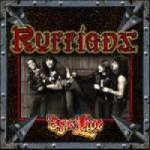 Carl Albert left this world nine years ago, but his legacy still lives today thanks to the tasteful work of great labels like Hellion Records (RUFFIANS) and Mausoleum records (VILLAIN). The 1985 MLP (six tracks) of RUFFIANS was a highly collectible record (both in vinyl and CD format) but fortunately here it is, at last available for the masses again. Do I need to tell you that Carl Albert’s voice is an enchanting one on this record? I think not… Carl belongs to the handful of highly gifted singers who made 80s US Metal so heart moving, I am also talking here of Rivera, Conklin, Arch, Kimball, Tate, Midnight, and Cyriis among others. RUFFIANS offer us a superb brand of American Heavy Metal, full of grandeur and emotions. Of course, they didn’t invent anything, but the noticeable fact is they are nevertheless more convincing than 95% of the so-called “true” Heavy Metal bands some greedy labels try to sell us today. Expect here class arrangements, powerful guitar licks, intoxicating choruses dominated by the celestial voice of Carl Albert. At this early time of his career, Carl was already a well-seasoned singer, in total control of his art. While the vast majority of singers of the present are simply technicians giving more than often the feeling they are doing a job (even if they do it well sometimes), Carl Albert, like the aforementioned singers, actually thought about the meaning of his lyrics while delivering them. That makes the essential difference I think, and this is precisely the reason I adore the 80s singers in the first place, because they added drama, epic and soul to the music. RUFFIANS play traditional Metal with the strong and usual MAIDEN and PRIEST influences but with the extra je-ne-sais-quoi that shows they are American. This CD (the vinyl versions are a little different, go to www.hellionrecords.de for further details) is fleshed up with six tracks recorded live in San Francisco in 1985. The live recording is faultless considering the conditions in which it was captioned (I guess) and it has the same dynamic than the studio one. So don’t expect any fillers or bad songs! Plus you will find three live songs out which are not featured in studio version on the MLP. I am almost ashamed to tell you how this CD is essential because you don’t need my point of view to realize that. Buy, hear and be happy!