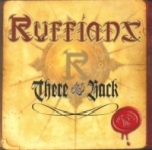 No, unfortunately this ain’t a fresh new album by San Francisco’s classic Metalheads RUFFIANS, but an enhanced version of what Hellion Records already released as “85 & Live” not too long ago. And as Edouard already did a good job in praising that record, the band’s music and Carl Albert’s phenomenal vocal qualities in particular (which I would only repeat here), I can focus on the facts regarding “There & Back” exclusively. The whole disc comes as a double CD set, of which the first one is track-wise almost identical to the Hellion CD. That means you’re also getting the legendary self-titled mini album as well as the six live tracks from the band’s show at San Francisco’s “The Stone” club on September 28, 1985. But while the Hellion CD already ends here, this edition offers four more classic RUFFIANS songs from their first demo from 1984 (all of them later re-surfaced on the mini album). Even though the final versions on the mini album obviously sounded way better, these are pretty interesting to listen to as well, as little bits and pieces got changed later on. And no matter which ones you prefer, you definitely will notice the big potential of the band in these demo versions already. Disc number two kicks off with their 1987 demo (4 songs), which features new vocalist Rich Wilde (who joined the band after Carl Albert left for VICIOUS RUMORS). Wilde, who sounds a bit different, yet also has a clean powerful voice, is for sure a superb singer and therefore was a good choice without a doubt. He delivers a fantastic job on these songs, never reaches the emotional input and charisma of Carl Albert though. But how many vocalists could pull that off anyway? As far as I can recall Hellion Records used these ’87 demo tracks instead of the ’85 live songs on the vinyl edition of their RUFFIANS release… This CD gets completed by a picture gallery and a live video clip of an unreleased song (‘Darkest Of Light’), which was shot while RUFFIANS played a warm up show for 2004’s edition of the German “Bang Your Head” festival (it also features scenes from their festival appearance as well). The booklet is a very tasteful designed twelve page effort with pictures (old and new), show tickets, magazine clippings and concert flyers as well as a written history piece on the band. So, all in all is this the ultimate collection that compiles every RUFFIANS recording up till now, which makes it an essential purchase for every traditional Metalhead. For more info go to www.ruffians.org. Label website and ordering information: www.osmrecords.net