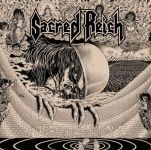 Whenever a band releases an album years after their last recorded output there is always an air of expectation as well as cynicism from fans and media alike. In the case of SACRED REICH this is their first new musical output since 1996’s "Heal" album. 23 years is a long time, so was the wait worth it? Well, SACRED REICH sure have delivered a solid album full of energy and there is a definite spark in this new material with an uptempo urgency in the opening salvo of the title track and ‘Divide And Conquer’, which are both hook filled Thrash fests with sharp crunching riffing and powerful percussion, complimented by the heavy low end of Phil Rind’s bass. His commanding voice is sounding timeless and in fine form, bellowing out the type of socio-political lyrics that the band is so well known for. SACRED REICH are out to prove a point that they can still thrash hard when they want to. Some of the material here wouldn’t have sounded out of place on "The American Way". The opening of the third track ‘Salvation’ sounding very reminiscent of the beginning of ‘Crimes Against Humanity’ from the aforementioned album and this track continues the catchy Thrash onslaught, followed by the raging ‘Manifest Reality’, which sees the band in full throttle thrashing mode. There are some twists and turns throughout, with flashbacks to the "Heal" and "Independent" era where they take their collective musical foot off the throttle a bit and inject a bit of a groove and melody (‘Death Valley’ being a standout example), something they have never been afraid to do before launching into another uptempo double kick driven energetic Thrash assault with ‘Revolution’. The production is crisp and powerful with each instrument cutting through the mix clearly and there is a great depth to the overall sound. A punchy and potent comeback from SACRED REICH, my only gripe is that it is only 31 minutes long. This album would have benefited from the addition of another few songs in my opinion, but it doesn’t out stay it’s welcome and will leave you wanting more. These Arizona Thrash titans have well and truly had their awakening. www.facebook.com/sacredreichofficial, www.metalblade.com