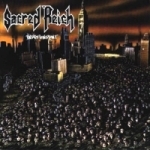 Great thing about this SACRED REICH re-release is that it made me listen to their whole discography again and rediscover some great Thrash Metal Lite! Their first two full-length albums "Ignorance" and "The American Way" (which was also re-released on Displeased Records) deliver some strong, D.R.I. and C.O.C influenced Thrash Metal and easily rank among the best in the genre. With "Independent" though, originally released in 1993 and featuring then new drummer Dave McClain (who later on went to join MACHINE HEAD), SACRED REICH progressed (or regressed, depending on your view) into a modern, groovy Metal machine. Almost all songs on "Independent" have catchy hooks and melodies, the band’s playing might sound much simpler than on their previous albums, yet upon close listen one will discover really well thought out arrangements and easily memorable songs, which wouldn’t have had done shame even to METALLICA and ANTHRAX at that time when they were released. Looking back now it’s quite clear that the whole modern Metal sound brought out to the masses by PANTERA in the beginning of the 90s also had influenced SACRED REICH. So this re-release has 5 bonus tracks (‘A Question’, the FEAR cover ‘Let’s Have A War’ and ‘Who’s To Blame’ – all from the "A Question" EP, the MDC cover ‘The Big Picture’ – from the "Open Book" EP, plus the radio edit of ‘Crawling’ from the "Crawling" EP – Frank) , the whole shebang has been remastered to the perfection, very clean and powerful sound, although the original recordings weren’t shabby as well. What was lost, though, is their Thrash / Punk zeal, so on the whole "Independent" is a much more accessible release, SACRED REICH’s own "Black" album or something, that marked the beginning of the sound and songwriting style which they went on to develop on the subsequent "Heal" album, but probably cost them their older fans. In any case, "Independent" still retains its high-quality songwriting and should appeal to people who dig melodic, groovy Metal with little Thrash overtones and some catchy as fuck riffs! Contact: www.myspace.com/sacredreich, www.displeasedrecords.com