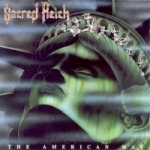 As I’m unfamiliar with other Sacred Reich albums, this review stands alone with no comparisons to the (what I’ve been told) classic early Reich albums "Ignorance" and "Surf Nicaragua". "The American Way" offers groovy Thrash Metal with plenty of double bass and shredding solos. The lyrics aren’t the typical "maim, kill, death" Heavy Metal lyrics but fairly intelligent tirades against irresponsible capitalism, war, pollution, apartheid, Heavy Metal blamed for suicide, etc. The disc even has a "surprise" ending with the interesting and bizarre horn based rap experiment ’31 Flavors’ offering the closing line "there’s so much music for you to choose so don’t just be a Metal dude it’s cool fool." Chessy but true. The production is crisp and clear and I’m sure this reissue will be snatched up by old school as well as "new school" Metal aficionados. The reissue got remastered and also includes 6 pre-production demo tracks as well as a video for the title track (there’s also a free logo patch included in the first 2500 copies – Frank). I’m off to listen to Reich’s early stuff now! www.displeasedrecords.com, www.myspace.com/sacredreich