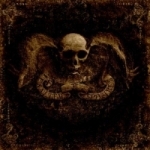 I still remember… remember those days whereas bands where not trying to make music in any certain style… style that was only enlightened by evil ways and pure hate… hate that was dominating the souls of those to be possessed… possessed by death, horror, blasphemy and destruction…destruction of all that is holy sacred and human… human which in essence is weak and it is just a recipient… recipient of failures of weakness and ignorance… ignorance here enlightened by flames of purifications and magick… magick of great blackened Metal of Death which recalls the spirit of old… old sound that recall those once mighty… mighty and barbaric sounds in which MORBID ANGEL, SODOM, MAYHEM and DISSECTION among few others, can be conjured… conjured in an abyssal spell of massive life extermination which will clearly rip flesh form bones… bones that will be feast of the undead which will glorify this day of mortal decadence… decadence in soul and mind, for this is undoubtedly one fierce, aggressive produced album of highest caliber that in this story-teller mind is even better than WATAIN and the likes of similar style and devotion… devotion to the dark which the spells herein contained speak of way of the devil… devil which in his horned throne is in ecstasy of this majestic Metal forged in fire… fire of the demon realm which is executed with such ferocious precision and harmony in which I can hear the sweet melody of pain… pain which will fall upon those fool enough not to search for this second abomination from these Satan’s sons of Finland, which put them near the throne… throne which will be the last resting place for those purveyor of molten Metal forged in the fires of hell. The Hammer Of Hate has spoken again, bringing us this massive curse upon us mere mortals. Mortals, hear me, although 2011 is still to finish, count this as one of the paramount release of this age. Age, of which I have spoken, is for the SACRILEGIOUS IMPALEMENT mandatory. www.myspace.com/sacrilegiousimpalement, www.hammer-of-hate.com