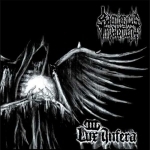 Finnish icon-smashers and grave desecrators SACRILEGIOUS IMPALEMENT have come to the point of getting their 3rd full-length studio album out, titled aptly "III – Lux Infera", spitting out 9 new venomous and unceremoniously lethal tracks that just couldn’t contain more wickedness in them. Formed in 2006, SACRILEGIOUS IMPALEMENT have made a long Satanic crusade on the land of all holy, crushing down and wiping off all sacred and Christ’s butt-kissing obstacles on their way towards the realm of utter evilness, so to speak. Despite a few obvious connections to some similar sounding troops of the blackest genre (e.g. DARK FUNERAL, MARDUK, IMPALED NAZARENE and the likes), SACRILEGIOUS IMPALEMENT have always followed their own path both ideology as well as music wise, without really giving a shit about anyone’s sayings about them. All this type of thinking has also been transferred into the band’s viciously attacking Black Metal, in which no colors of pitch-blackness and utter demonic hate against Christianity are saved one goddammit bit. Just by listening to this very opus in question, I really cannot question the band’s popularity amongst the Black Metal hordes at all. "III – Lux Infera" is a pretty enjoyable slap of well-executed Black Metal of the highest profile, giving more for its listeners than taking away from them. For any further information, go to: www.sacrilegiousimpalement.com, label: www.woodcutrecords.com