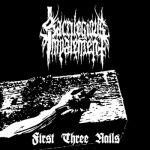 Finland’s cruel Black / Death Metal masters, formed back in 2006, presents here their first three recordings in one CD, including their debut demo and the two following 7” EP songs. Their setyle has not changed that much from the demo, which is a killer form of Black Metal with many touches of MAYHEM’s “De Mysteriis…” with slight touches of evil Death Metal à la DEICIDE. Although the recordings of course vary in sound, they are all good on its own, I think I can hear the MAYHEM influence more in their EPs. The band plays mostly up-tempo, but when doing some slower passages, you can hear a DISSECTION influence too. For the last songs, of their last EP, there is a noticeable use of more evil Death Metal influences in the realm of early MORBID ANGEL and even some ugly punked out Metal sound. Of course their albums are way superior and even more evil sounding, and better produced and performed, but this is quite a very complete and good compilation of the band and for those looking to have all their material here is a good chance to have without having to hunt (and pay higher prices) of their early material. Their last album “III – Lux Infera” is found usually spinning in my player so you know this is killer. More information at: www.facebook.com/sacrilegiousimpalement.official, www.satanath.com