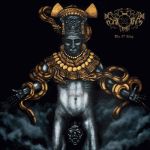 SAQRA’S CULT is a band from Belgium that explores Inca culture as an aesthetical theme, so when coming across them you naturally think of bands which focus on specific mythologies like NILE, MELECHESH, THE FIRSTBORN or SARPANITUM. SAQRA’S CULT, however, incorporate here no “native” sounds or regional instruments (having dropped such gimmicks), and whereas the aforementioned names tend to be more inclined towards technical Death Metal, these guys are more on the Black / Death side without the Folk elements. This is their second album, and from the beginning it gripped me with its impressive intro that sounds like some homicidal priest bellowing inside a bloodied crypt while holding an obsidian blade towards you. Then the music erupts and you are treated to some of the most ferocious and unrelentingly fast Metal I’ve heard in a good while. And it sounds amazing! The opening title track is so good I find myself inaugurating a list of contenders for my personal top releases of the year. The tracks are long, and so even though you only have four of them it amounts to half an hour of music (technically an album). And it’s a massive-sounding half hour. The music is not pompous or embellished with orchestrations or anything like that at all. Just the regular instruments you expect from Metal, but with a powerful production and blistering playing. Kickass drumming, kickass stringwork, and vocals that echo from the deep gorges of Hell. Even though they are very fast and very heavy, there is always melody to be found, perhaps more noticeably in ‘Legends Of Pururaucas’ (about a historical Inca victory that included fake stone warriors). The cover artwork, naturally, also follows the style of the debut album and the Inca theme, albeit rather more visually shocking. Black Metal very rarely sounds this astonishingly good these days. I have nothing but the highest praise for this killer release! Get this album from www.facebook.com/saqrascult, www.amor-fati-productions.de