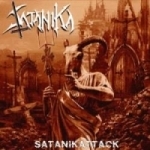 SATANIKA is one of those young bands in which what you see on the cover is a vivid image of what you are going to get with the music (‘ol good horned creature holding a cross in his hand with a barren wasteland in the background). This is the debut album of the band, which has previously released a bunch of EPs and even a CD compilation of those limited recordings altogether. What we have here is an attempt to capture the 80s Thrash long lost feeling but given certain circumstances of this recording I could say these guys have not really accomplished that properly. The biggest flaw here is the lifeless, plastic and dry digital production methods these compositions have been recorded with. The drums, being the most annoying of all the flaws found on this album, take a prominent role to destroy any old school feel these songs try to convey. The vocals…Well, they are also in need of a completely different singer because these Black Metal shrieks sound completely horrible to say the least and the combination with the thrashy / heavy riffs is an utterly disturbing experience. Song titles like ‘Sodomize The Nun’, ‘Evil Sex Commando’ and ‘Razor Maniac’ might be tempting to any headbanger looking for action but I really suggest you guys to save your $$$ for something else. Apparently, Bobby Gustafson (ex – OVERKILL) has joined the ranks of SATANIKA recently and I just hope he is not wasting his time by joining this band. For all further info check out one of these websites: www.satanikathrash.webs.com, www.myspace.com/truesatanika, www.myspace.com/australholocaustprods