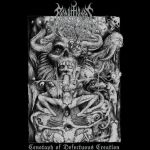 SEMPITERNAL DUSK’s second record “Cenotaph Of Defectuous Creation” is out since August of this year but finally made it into the realm of Voices From The Darkside. Portland’s very own Doom / Death trio put together almost 37min of wicked riffs and deadly growls to torture and maim whatever crosses their path. The record itself convinces with a crystal clear production, which to my liking manages to create a lot of aggression and power. Side A as well as side B both feature the lately seemingly popular number of three tracks each and display a similar pattern – they both start off with a 1+min track followed by a 10+min track and a 6+min track. The B-side however features a 6+min track first followed by a final 10+min onslaught. To sum up the music, the record mainly features swirling riffs embedded between mostly doomy but also fast passages. The Doom aspect of course outweighs the blast parts but that’s what you gotta expect when dealing with bands like SEMPITERNAL DUSK. My personal highlight of the record would be the second track on the B-side entitled ‘Refracted Suffering Through The Windows Of Hell’ which starts off very slow only to abruptly break into a blast beat. While all songs are heavy as hell due to the predominant Doom factor, this one is definitely the heaviest and features the most intense riffs. All in all the record can definitely be described as quite dynamic with a lot of shifts and changes in-between the songs. Fans of the genre will definitely be pleased and should check out the band via www.facebook.com/sempiternaldusk and / or www.darkdescentrecords.com. Long live the riff!