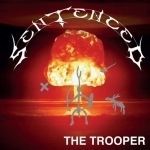 Another review that I cannot be impartial on. There are so many good memories I combine with SENTENCED. I was lucky enough to see them live with BOLT THROWER back in 1995 and still their first three albums and of course “The Trooper” mean a lot to me. It was after the release of “North From Here” when they got more and more attention in the underground as this was already a classic piece of technical Scandinavian Death Metal. Even Century Media licensed “North From Here” after its release via Spinefarm and pushed them further to the next level. But after the release things within the band changed and the band was looking for a different sound. First tender result of this search was the legendary “The Trooper” EP. What can I say about this cover? Maybe one of the best IRON MAIDEN covers ever made (apart from NAGLFAR’s cover of ‘The Evil That Men Do‘ which was on a tribute sampler in Japan). This track captures the original feeling of this classic track perfectly painted black by SENTENCED. Everything was done right here. Perfect instrumentation, damn good vocals of Taneli Jarva and the choruses in the back really nailed it. Listen to the solo of Miika Tenkula (RIP) and you know what I mean. But “The Trooper” wasn’t just a simple cover. It was their start into something totally new. ‘Desert By Night‘ is the result of this search. Combining their old and new style with a very memorable hook, this is one of the best tracks ever made by SENTENCED. Perfection in songwriting, instrumentation and style, it is a shame that this track was never released on a full-length. And the track also was the bridge to their next full-length album “Amok“. Definitely a rough version of the style later to be found on “Amok“, I still dig their rough approach on this track and I can not explain, how much I love this track and how many times I listened to it over the years. ‘In Memoriam‘ is an older demo track and has a huge BOLT THROWER touch. A really good old school Death Metal track and especially the audible bass-lines are very enjoyable. SENTENCED really was a band with a damn good sense for good songwriting and song structures already back in the early days. ‘Awaiting The Winter Frost‘ was taken from the “North From Here” album. And it was their first real hit. A very good and technical Death Metal track with a touch of ATHEIST in it. This track showed their immense potential already on the second album and also underlined the huge progress the band went through in such a short period of time. Vic Records decided to add their “Journey To Pohjola” demo from 1992 as well on this re-release and so the next track is ‘Wings’ known from “North From Here“. Already on this demo, the band had perfected their old Death Metal sound and was far ahead of their time in composing and playing. ‘In Memoriam‘ gets presented once again in its rougher form from the mentioned demo but this version has a certain charm and I prefer that one. The last track ‘Mythic Silence‘ is another old school tune with a rough charm. But apart from that another indication that SENTENCED was a band full of ideas and highest creativity. Already back then they used to incorporate samples, whispers and stringed guitars to vary the songs and the lead guitar already revealed bits and pieces what later lead into their sound on “Amok“. A great piece of history and a must have for all SENTENCED fans. Thank you Vic Records for making it available again. www.sentenced.org, www.vicrecords.com