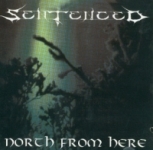 When "North From Here" originally came out way back in 1993 Finland’s "northernmost killers" SENTENCED mainly got compared to the Swedish invasion of melodic Death Metal, played by acts that almost exclusively popped up in the Gothenburg area at the time (thus established the term "Gothenburg style")… Well, of course there’s similarities in their writing (lots of MAIDEN-esque guitar attacks, strong melodylines mixed with a very aggressive thrashy vocal style), but when listening to it again nowadays, I noticed another strong influence immediately: old ATHEIST! Just compare Taneli’s vocal delivery to the stuff that Kelly Shaefer used to come up with around "Piece Of Time" and at the same time have a listen to the amazing complexity of the songs, written by 18 – 20 year old youngsters here! The main difference probably is that SENTENCED played their stuff a lot more straight forward, instead of going for tons of tempo changes and stuff, yet maintaining a very high musical level though. Needless to say that I’m still heavily impressed by this album after so many years after its original release. This re-issue also includes a bonus CD that features a 28 pages fat booklet with very entertaining liner-notes by former SENTENCED vocalist Taneli Jarva and Century Media’s Ula Gehret, lyrics to the songs (unfortunately just for the regular album tracks), lots of great moody pictures in the vein of the album cover, as well as the original front cover. The bonus disc offers the 3-song "Journey To Pohjola" demo, 1994’s awesome "The Trooper" EP (4 songs, incl. SENTENCED’s ripping version of the IRON MAIDEN classic), as well as the 2 previously unreleased, pre-"Amok" songs ‘The Glow Of 1000 Suns’ and ‘Amok Run’ (also from 1994). I really have no idea why the band constantly refused to give the permission to release them (until now) as they are absolutely incredible (except for the rather strange backing vocals in ‘The Glow Of 1000 Suns’ maybe) and would easily have fitted in on the "North From Here" album as well. This double CD-set is available for the price of a single CD and comes in a deluxe looking, black slimcase, so go for it if you still don’t own one of SENTENCED’s best albums ever yet! All further details you may find at www.sentenced.org or www.centurymedia.de.