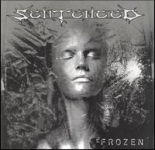 The last couple of years before they finally called the quits Finnlands suicide squad SENTENCED not necessarily delivered material that appealed to the average Voices reader, yet were admired by quite a few nevertheless (including yours truly)… No matter if it was their early, pure Death Metal days (“Shadows Of The Past”), or the aggressive Death / Thrash outbursts of “North From Here”, the more melancholic Metal tones on “Amok” or their rather Gothic inspired swansong releases with new frontman Ville Laihiala (“Down”, “Frozen”, “Crimson”, “The Cold White Light” and “The Funeral Album”) – I more or less pretty much enjoyed each one of them for different reasons (hey, you should know by now that I’m a wimp!). “Frozen” was a solid album from their farewell era, that by now means could compete with 1996’s groundbreaking “Down” record though. It had a bunch of great songs on offer nevertheless. The main problem of SENTENCED at the time obviously was that their writing formular became a bit too predictable and repetitive and a lot of the songs (despite their individual class) started to sound too much alike. This re-issue is basically a re-issue of a re-issue because in 1998 Century Media had already put out a limited digipak version of the album with a slightly changed cover design and the same four additional bonus / cover tracks: ‘I Wanna Be Somebody’ (W.A.S.P. – pretty lame and not necessarily fitting the band’s own style), ‘Diggin’ The Grave’ (FAITH NO MORE – quite cool), ‘House Of The Rising Sun’ (ANIMALS – the note “2.6 per mille” should speak for itself here…) and ‘Creep’ (RADIOHEAD – don’t know the original, so I can’t really comment on this here). The main difference now is that the running order of the tracks got changed and the packaging turned out even more amazing. It comes as a sort of book-like edition, very high-quality looking and with an impressively and very stylish booklet inside. So, if you’re open-minded enough for music besides grim Black Metal and brutal Death Metal, but missed out on the limited edition back then, make sure to go for this now.