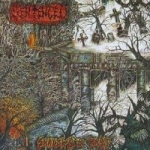 SENTENCED
Shadows Of The Past
(Century Media Records)
106:26min

It’s hardly imaginable that this is basically the same band that released albums like "Down", "Frozen, "Crimson" or "The Funeral Album" (that all had a very melancholic Gothic Rock type feel to ’em) shortly before they called the quits… Well folks, in case you didn’t know or never really cared before, let me tell you that Finland’s SENTENCED originally started out as a pure, straight ahead Death Metal act, with more or less just one major influence, and that was DEATH (first three albums exclusively)! It was so obvious that Norway’s symphonic Black Metallers LIMBONIC ART even dedicated one of their albums to SENTENCED in 2002: "The Ultimate DEATH Worship"… Well, of course I’m just kidding here, but it’s indeed really scary when you listen to the material featured on their debut full length "Shadows Of (The) Past" how close guitarists Sami and Miika (the latter also being responsible for the vocal delivery in those days), drummer Vesa and bassplayer Lari (later to be replaced by Taneli) came to Chuck Schuldiner’s classic songwriting style. Or in other words: what MORGOTH used to be for Germany at the time, SENTENCED definitely was for Finland! I really enjoy this material a lot, especially because it was also already executed and produced very professionally – which was still very unusual back in those days. The same could already be said about their two previously issued, also very strong demo tapes "When Death Joins Us" (1990) and "Rotting Ways To Misery" (1991). Even though Miika’s vocals still didn’t sound as matured on "When Death Joins Us" yet, both impressively showcased the incredible potential of the very young four-piece already. But you can easily check that out for yourselves now (if you should consider buying this re-release), as both were included on disc two here (officially for the first time). The booklet features the album’s lyrics, a handful of old pictures, both demo covers, an old gig flyer as well as both front-cover artworks (the original Thrash Records version and the Century Media re-release, so that you can decide for yourselves which one you’d like to use). The whole package furthermore comes in a black slimcase and is being sold for the price of a single CD, so there’s no excuse anymore to miss out on it this time. For more info check out www.sentenced.org or www.centurymedia.de.