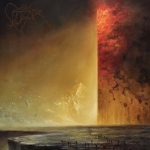 In the year of 2013, some unearthly energy bursted out from the depths of the Norwegian wilderness. They called themselves SEPULCHER. The precipitous mountainsides, dipping rivers and desolate lack infested west coast of Norway, always hints a place of isolated and desolate wonder but this Fusa land is smugly honking and worshipping the sound that is firmly rooted in old, obscure Death Metal and yet brimming with an distinctive energy all their own. INCULTER, REPTILIAN and SEPULCHER all have emerged from the deep potholes of Hordaland and releasing albums beholding aggressive, dark and primitive spirit. SEPULCHER released their debut album “Mausoleum Tapestry” in 2015, which was a deranged creation of Death / Thrash delirium. Now this Fusa based quartet returns with a dismal and desolate but equally heavy, energetic and aggressive offering, their sophomore album “Panoptic Horror”. “Panoptic Horror” was released in association with Edged Circle Productions on CD and vinyl LP formats. A limited cassette version is being released in co-operation with Morbid Skull Records. The sound of SEPULCHER might have similarities and draw inspiration from bands such as DARKTHRONE (Death Metal years), OBLITERATION, TRIBULATION, MORBUS CHRON and CADAVER, but the essence of their creation is the atmosphere of unnerving despair and eerie hopelessness. While the first album was a raw and ripping presentation of classic styled Death / Thrash, eying back to the glory days when Thrash first broke loose like a symptom of the universe and pushed into the uglier, darker, heavier and dismal zone of Death. In “Panoptic Horror” SEPULCHER grasped a similar aura of sound which is more refined in production and balanced more closely at the forefront but still gives the feeling of being played live in the studio. Not sure if that is the case but the organic feel is evident like a double edged sword. You can clearly feel it with the songwriting, flow of energy and atmosphere. Directly from the opener ‘Corporeal Vessels’ it sounds elderly and thrashy, which immediately prepares the mood for an ethereal journey ahead. And above all the fast parts like in ‘Towards An Earthly Rapture’, ‘Ethereal Doom’ or ‘Scourge Of Emptiness’ will throw yourself into the tumultuous landscape of eerie uncertainty where mind and thoughts are swallowed by panoptic nothingness. On ‘Corrupting The Cosmos’ and ‘Ethereal Doom’ the slowed down tempo and intensity added more diversity to the album in forms of infectious, filthy and spine chilling doom. ‘Abyssal Horror’ brings back the spirit of early DARKTHRONE (“Soulside Journey” years) while ‘Scourge Of Emptiness’ continued the shrewd journey towards panoptic nothingness where darkness evade light. SEPULCHER closed this album with ‘Haunting The Spheres’, mid-tempo riffing paired with blistering speed riffing which will leave your subconscious mind to the tip where end and beginning collides. The vocals give a lot of energy to the vicious character of this record; it’s unforgiving and sepulchral and gave a fascinating nod to the old Araya school. Introducing the record, Edged Circle Productions’ boss Stian Smørholm, better known as Iscariah, bass player in IMMORTAL (1999 – 2002) expressed, “Crafting mayhem as if it were a fine art, SEPULCHER rage through their new album "Panoptic Horror" with an energy that never wavers”. The aptly chosen cover art by the Polish artist Mariusz Lewandowski, visually encapsulate the atmosphere this record beholds. “Panoptic Horror” is a very sincere record that plays with many different influences and is definitely worth of many more thoughtful listens as this will keep expanding to those who traverse beyond horizon. Explore the band at www.facebook.com/sepulcherband, or visit their label page: www.edgedcircleproductions.com