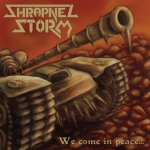 ‘The old school Death Metal bulldozer…’. Wow… now there must be something in this Finnish Death Metal act called SHRAPNEL STORM, I can hear some of you suspiciously thinking. Well, in fact the first sentence actually says it all already: SHRAPNEL STORM play Death Metal, the old school kind – and they count on mid-paced or relatively slow tempos within their Death Metal too, which should be all fine in most of our books, as I should believe. The 2 songs – ‘Detracked’ and ‘Deathroller’ that have been included on this 2-song promotional disc, are ok. Saying ‘ok’ obviously sends two different types of signals out for people: either this stuff is something that deserves more listens – or a trash can could be the next home for a disc like this. Sure thing, SHRAPNEL STORM, that was founded in 2007, want to be out there, unleashing their old school tinged, sludgish Death Metal in the same common spirit like many of their thousands of other comrades. Old school Death Metal is ‘in’ again – and both you and me want to be a part of it, right? There’s only ‘ifs’ and ‘buts’ there but after a little while SHRAPNEL STORM’s stuff unfortunately starts dragging quite a bit to be really honest with all of you. Or saying it even a more radical way, this just stuff tends to come in one ear – and goes out the other, without really making a deeper impact on me. I am sorry, although I am not sure whether there’s even nothing to be sorry about. Well, not for me anyway. More about these Finnish tank drivers can be found at: www.facebook.com/shrapnelstormband, www.reverbnation.com/shrapnelstorm or www.shrapnel-storm.com