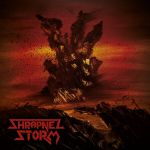 There has been a number of memorable Death Metal bands from Finland and SHRAPNEL STORM keeps up with their country’s reputation. This, their sophomore self-titled album, showcases solid Death Metal. This is heavy as hell and packs a lot of punch. Their lyrical themes rely on war and battles. So, yes, there is a notable BOLT THROWER influence. But rather than just copying the UK legends, SHRAPNEL STORM adds their own touches to make this style more of their own. The memorable and heavy riffing alone makes them stand out. Each song develops flawlessly, which tells a lot about their composition abilities. I felt that the second part is more distinctive and original, but the whole album is really enjoyable. They usually dwell in a mid paced Death Metal and sometimes they do speed up to D-Beat rhythms but never losing the heaviness. Ville Yrjölä’s growls are deep and constant (although a bit one dimensional), enhanced by a clear diction. Every single word he sings is understandable. The guitar tone is thick and snappy. Both guitarists, Tri and Aki, keep firing one great riff after another. Some melodic and harmonic lines in certain parts are a nice touch. Guitar solos are not flashy yet they pop up in key places. Pete’s bass work is well grounded and fits perfectly with Kurre’s drumming. I mean, both of them make up a terrific and pounding rhythm section. Overall the production is brilliant and it sends you back to the early / mid 90s. A clear mix and a dynamic master process just adds up to a great listening experience. This is a band that I never heard of before, but now I am looking forward to some new stuff. I usually keep away from comparisons, but in this case I got to say this: with BOLT THROWER gone, the underground was waiting for a honorable heir to the throne and if they keep developing and making such amazing music, SHRAPNEL STORM may very well be suited for the honor. 100% recommended for all Death Metal fans, new and old. Go get this album ASAP. I am certain you won’t regret it. Band contact and support at www.facebook.com/shrapnelstormband. You can buy their album from www.facebook.com/greatdanerecords