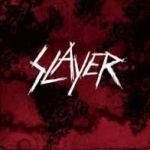 It’s been a while since the brand new SLAYER record got unleashed, but none of Voices writers took the burden of responsibility of dealing with it so far. No one dares or simply no one cares? Sure, those glorious times when any new SLAYER release meant masterpiece by default are long gone by now, but what the hell, they already have their fair share of groundbreaking records under their belts and must be one of the few bands that any self-respecting Metalhead (regardless of how underground you want to seem) should not ignore. Even if it isn’t the easiest stuff to swallow, as it has taken me like ten spins of the record just to figure out if I like it or not in the first place. Yet it surely wasn’t any "serious reviewer’s duty" alone that made me put big black fucker on and on again. Some dark magic is still possessed by SLAYER, none can take it from them. In a way "World Painted Blood" may be seen as "South Of Heaven" of this day and age. You see, just like it was in the late 80s, SLAYER didn’t comfort themselves by just forging one more album by the same mould as it’s successful predecessor. However tempting it could be to take the easiest route, they decided against it once again. I wonder why the only song they chose to reveal long before the album’s release date happened to be the one misleading the fans into thinking that the new album was going to be along the lines of the previous one, maybe even faster and more straight forward? Some call it Punk, you know. Indeed, early Punk influences has never been so evident in SLAYER’s music since "Undisputed Attitude" album back in 1996 until now. At times it even seems like SLAYER had decided to make one more Punk album, this time with their own songs, but found the idea not so exciting in the last moment and generously diluted it with more regular elements taken from "South Of Heaven" up to "Christ Illusion" period of their career, so in the end "World Painted Blood" came out like a huge puzzle. It’s contents are so diversified that I believe many fans would find different favorite tracks here. I wonder if the musicians themselves were a bit puzzled by the final outcome? Questions and questions again. Maybe there would have been less of them if I did care to read the numerous SLAYER’s comments about the upcoming album beforehand, but somehow I used to trust my ears more than the eyes when dealing with music. Wrong upbringing, perhaps. "World Painted Blood" is professional all the way through, but it lacks a bit of something wild and evil that used to make early SLAYER so special. Instead we are offered carefully put together songs, virtuoso playing and top notch production served on high quality heavy duty vinyl in excellent packaging. The general impression is that too much brain was involved here, I’d prefer the balance being more on the "gut feeling" side, but still it’s solid as a rock album, worthy of carrying the proud name of SLAYER. It’s great to see the band still being alive and kicking entity, always hiding a surprise or two up their sleeves and ready to amaze their fans. Neither years nor Grammies could turn SLAYER into cold and soulless money-making hit-producing machine. If any summary is really necessary, it would be along the lines of this album asking more questions than giving the answers. So why not put "World Painted Blood" on and try to figure them out yourself? It’s better than killing time reading some stupid review anyway. www.slayer.net