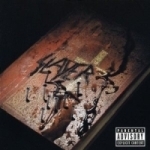 After many delays (which also included a label change) it’s finally here – the long awaited new SLAYER disc. And, is it worth the long wait? The answer is plain and simple: no, it’s certainly not! Unlike fellow Thrashers DESTRUCTION and KREATOR, who both more or less succeeded in releasing great new albums in their classic old style, SLAYER unfortunately decided to continue to walk the path of annoying modern NU Metal with "God Hates Us All". Too bad really, because of that there’s a big lack in most elements that made them so popular in the 80s. They will probably call it "musical progression", but I just can’t agree with a statement like that at all. If you listen carefully you will recognize a lot of wellknown SLAYER riffs from the past, that simply got recycled for this new record. The tuning is just a little lower and the groovy elements have become more important. Is that progression? I don’t think so. To me that’s jumping on a bandwagon to appeal to the current mainstream crowd. Besides that, Araya’s unique vocal style suffers from a way too big Hardcore influence, which destroys a lot of the songs. He’s basically just screaming all the way through. Another big (personal) letdown is the drumming, which always was a very important aspect in SLAYER’s songwriting over the years. But ever since Lombardo’s departure SLAYER never managed to fill those shoes with an adequat replacement. Bostaph is a killer drummer, no need to argue about that, but to really convince a die hard SLAYER maniac, he still has a long way to go. So, the only positive aspect regarding "God Hates Us All" is the fact that it (at least!) turned out a little better than the previous, rather stupid "Diabolus In Musica" offering. But that wasn’t any difficult at all anyway, so… Further info: www.Slayer100.de.