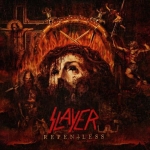 The big problem of today’s Metal scene is that fans want their favorite bands to record their classic albums once again. PRIEST fans are waiting for new "Painkiller", METALLICA fans want new "Master Of Puppets", MAIDEN maniacs would love to get another "The Number Of The Beast" or "Somehwere In Time", and so on. Someone smart once said that sometimes fans become bands’ biggest enemy, and probably that’s right. Instead of just accepting (or not of course, it’s all a matter of personal taste) the new release, we have these neverending discussions what the band should record, how they should sound and so on. So what about SLAYER? Let’s start from saying that discussing SLAYER in public is like discussing politics: you can make enemies in a matter of seconds, everyone has his favorite album, and will argue with you to death that the one he likes is the best one. But actually that’s cool, we’re all Metal nerds and we love talking about our passion, right?! So no, SLAYER didn’t record a new "Reign In Blood". It’s not a new "Show No Mercy" either. So does it sound like SLAYER at all? Oh bloody hell yes, it does! And probably it’s the best SLAYER album since "Seasons In The Abyss"! It’s all here: venom, energy (a lot of energy!), fury, evil and angry vocals, precise and powerful drumming, and tons of great and insane riffs and solos. Sure, it’s impossible to replace Jeff, but most probably he is smiling right now somewhere out there, as Kerry did a really great job on this one. Paul Bostaph deserves a special mention as well: sure, Lombardo is a legend, he helped to build up SLAYER. So hands down. But just listen to what Paul is playing on this album! This guy is fuckin’ amazing! "Repentless" also has this cool old school vibe that was missing on the last few SLAYER albums: it’s pure fuckin’ Thrash Metal from big T and big M, from the first to the last second! We had to wait 6 years for this album, and the future of SLAYER was under a huge question mark for a while. It’s of course up to you if you will accept this "new" line-up (alright, hands up who wants to hear more Gary Holt on the next album?!), but hey, just listen to "Repentless". It’s SLAYER. THIS SLAYER. And they are the still reigning kings of Thrash Metal! More information: www.slayer.net and www.nuclearblast.de