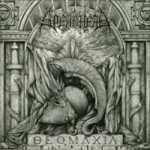 UK’s militant Death Metallers SPEARHEAD have sharpened their weapons of destruction and blasphemy in their dark catacombs for 4 years, before coming back to the daylight with some new sadistic intentions to destroy our eardrums. SPEARHEAD’s previous album, "Decrowning The Irenarch" on Invictus Productions, introduced quite a lethal arsenal of weaponry already, bombarding us with 11 tracks that did not save anyone for begging for mercy but just making sure they were the ones to hit the very last nail through your palm in the unholy crucifixion ceremony of theirs. And now, let’s land back to the ground robustly, shall we? "Theomancia", SPEARHEAD’s latest opus for the world’s enslavement, simply tightens a robe around our necks. With the 11 new tracks that they have featured for "Theomancia", there really aren’t any weak spots within the band’s songwriting. I mean, as much as there’s sheer furiousness, intensity and aggressiveness involved in their malevolent sounding, blackened Death Metal outbursts, everything still sounds very controlled, yet somehow calculated even. It could be even said that SPEARHEAD work out like a well-oiled stratagem, leaving no holes for escaping. In many ways, SPEARHEAD do sound strongly like the split-up Kansas City warmongers ANGELCORPSE; a crushing and all-wrecking death machine with tons of venomous firepower behind them. The brutality level on "Theomancia" hasn’t increased that much compared to the band’s excellent previous work "Decrowning…", but somehow it has been refined and sharpened a little bit, sort of providing even more heads-chopping effect on its listeners. The solos are truly spot-on on this record; wicked, piercing and having pretty much the same evilness in them that Trey Azagthoth of MORBID ANGEL is often capable of churning out by his 6-stringer. The blastbeat mayhem that has been spread all over the songs on "Theomancia", is tastefully done also, although admittedly it may be a minor turn-off for some extreme Black / Death Metal diggers due to possibly stealing too much attention among other instruments. In any case, "Theomancia" speaks for great volumes for SPEARHEAD’s full potential to become one of the serious contenders to conquer the throne of UK’s number 1. leading extreme Black / Death Metal act. The quality factor "Theomancia" has been blessed with, SPEARHEAD are definitely heading toward the aforementioned goal in the course of time. www.myspace.com/spearheadofficial, www.agoniarecords.com