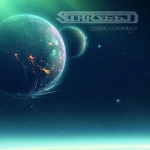 As the year 2019 draws to a close, GS Productions surprises with a little gem from the past. STARSEED, based in Germany, only released one EP in their career back in 1997. At that time in Germany Helmut Kohl still was chancellor, we used to pay with Deutsche Mark, Lady Diana was killed in a car accident and the world wide web was nothing but a vague picture of the future, instead everyone was playing with a weird gimmick called Tamagotchi. HYPOCRISY released “The Final Chapter”, BELPHEGOR their second album “Blutsabbath”, ASSÜCK succeeded with “Misery Index” and SADISTIC INTENT published the “Ancient Black Earth” EP. That year saw also new albums by DEFLESHED, VADER, CROWN OF THORNS (the later THE CROWN), HAEMORRHAGE, GOD DEHRONED amongst others. Just to give you an impression how much time has passed. Six songs are featured on the “Cosmic Conspiracy” EP and all are on the same level, making this EP a solid piece of Death Metal. Technical Death Metal without being to technical, to me it sound like a slower or downsized version of HATE ETERNAL (who released their demo in 1997), less speed and not so many rhythm changes and guitar soloing. What makes the band stand out from the majority of Death Metal bands is the use of keyboards. Of course everyone has NOCTURNUS in mind, when it comes to the topic Death Metal and keyboards. But STARSEED are playing more straight forward, making the atmosphere some kind of sterile and antiseptic. “Cosmic Conspiracy” is no rotten Death Metal from the grave but rather breathing the cold, empty void of cosmos. The EP is released in physical format as an 6-panel digipak with 8-page booklet, limited to 100 copies. And as streaming and download on Bandcamp. Do not hesitate and visit www.facebook.com/starseedarea or www.gsp-music.com for your journey into cosmic Death Metal.