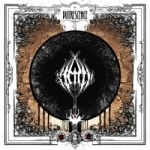 Coming across a band that consists of TRIBULATION and NECROVATION members made me expect to hear something similar to at least one of these great, yet definitely differently sounding Death Metal bands; however the result is damn surprising – in fact, STENCH sounds totally different from both. Instead of making utterly heavy or blood freezing, horrifying music – this project presents the more "melodic" side of these talented guys’ songwriting, and I’m not talking about wimpy "let’s growl with IRON MAIDEN riffs on the background" attitude, but something more reminiscent of early AT THE GATES stuff. Temp changes are pretty frequent here, yet the totally frustrated, angry mood is well delivered all the time, through the slower and really fast parts alike. While the musicians sound absolutely tight and the production is great, the two most noticeable highlights are the clear-throughout-the-whole-album bass lines, which contribute a lot to the utterly grim atmosphere, and the vocals. While the vocals have some hints of Thomas Lindberg’s singing, one of the elements that would make "In Putrescence" stand proudly among other early 90s classics (had it been released more than a decade and a half ago) is the fact that this Death Metal band does have a vocalist that has a voice of his own and doesn’t sound like yet another this or that growler’s copycat. Overall we have a damn solid and professional debut here, and in order to get leave the listener craving for more – the length is as short as 30 minutes. Whether a new STENCH album will follow soon or the band’s members will be busy with other projects for a while – better keep and eye on this band’s updates! www.myspace.com/swedenstench, www.agoniarecords.com