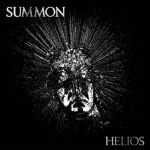 Godz Ov War Productions, is an independent label dedicated to extreme music from the depths of the underground. And this Polish label always stayed true to this statement by continuously bringing forth numerous releases out of nowhere – like swarming flies bursts out of hidden cracks of a cave. SUMMON is no difference, although it’s quite interesting to find out that, in their 4 years of existence, the quartet in question debuted with an EP entitled “Aesthetics Of Demise” (released in 2017), followed by full-length album entitled “Parazv IL Zilittv” (released in 2018) – both in co-operation with prestigious Iron Bonehead Productions and not much after, the 2nd EP entitled “Helios”, now released in co-operation with Godz Ov War Productions. Such a hellfire profile, without any doubt speaks volume about the excellence these Portuguese upheld. Obscure Metal of Death, Death Black, Black Death – many terms are seeming coined with SUMMON to describe their sound of wickedness, barbarism and ferocity. On initial releases SUMMON operated as a trio, but in the year of 2019, they had some changes in their line-up with the addition of a new guitarist, which must have helped to bring even more massive turbulence to the echoing storm of madness they conjure throughout this EP. And, upon exposing to three tracks ranging at around 19:56 minutes, you will get the essence of that uncompromising and relentless yet primeval attack encapsulated here. With a sickening assault of guitars and drums, gasping vocals and burly INCANTATION-esque atmospheric horror – the experience of listening to “Helios” seems like reading “At The Mountains Of Madness”, while being in the middle of a hellish arctic storm. Keeping this in mind, followers of GENOCIDE SHRINES, GRAVE UPHEAVAL or PORTAL shall give “Helios” many spins and whoever not accustomed to a truly despicable sonic experience shall find this dreadful and alienating but that would surely end up praising SUMMON in hindsight. Find out more about the band at www.facebook.com/summondeath, and visit their label page at www.godzovwar.com.