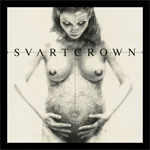 The French Death / Black Metal machine with the Norwegian name is back with its third album! Nearly three years after their great "Witnessing The Fall" album, "Profane" is here to show SVART CROWN as a band that is on the best way to become a monolith in the European extreme Metal scene. Their first efforts already paved the way with their pretty morbid mix of Death Metal structures (MORBID ANGEL and VADER came to mind) and Black Metal guitars in the vein of SATYRICON. Now "Profane" shows how the band manifested their style and perfected it since then. A mighty instrumental intro, that is typical for SVART CROWN, called ‘Manifestatio Symptoms’ leads the way for the brutal opener ‘Genesis Architect’ and the following ‘Intern. Virus. Human’, which plays in the same league. Disharmonic and sometimes even dissonant guitars meet brutal drum grooves with sudden outbreaks of blasting anger, crowned by misanthropic vocals. ‘In Utero: A Place Of Hatred And Threat’ shows SVART CROWN blacker than ever, with structures more chaotic than many Black Metal bands will ever be. ‘Until The Last Breath’ depicts the slower, gloomy side of the album, a grooving monster that somehow reminds me of SATYRICON trying to play a song of later MORBID ANGEL, before a massive blastbeating break sets in as a last breath. The title track is not as ‘Profane’ as the name suggests, for it shows the main quality of SVART CROWN: extremely varied songwriting with a lot of surprising breaks and changes in speed and guitarwork, from dissonant to even melodic, from chaos to order. The misanthropic masterpiece ‘The Therapy Of Flesh’ shows again all aspects of the colossus SVART CROWN became with this album: variable structures, where gloom meets outbreaks of anger and frustration, black lava streams making way for chaotic Black Metal beats. The instrumental ‘Venomous Ritual’ surprises with hypnotic tribal drumming, being a moment of peace and rest before the raging ‘Ascetic Purification’, that seamlessly leads into the final epic ‘Revelation: Down Here Stillborn’. Another monolith of misanthropy here, that leaves the listener quite perplexed, just like the whole album. I admit that it might take more than one listening session, but it worth the time, since "Profane" is anything but boring. This is an album to remember. If you doubt my words, check it out for yourselves: www.svartcrown.net, www.facebook.com/pages/svart-crown/141662170999 or www.listenable.net