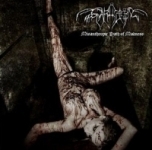 Deep in the Norwegian woods there must be a secret place where the heart and soul of the Norwegian Black Metal is hidden and only the trustworthy bands are allowed to enter this unholy place. It’s for sure not a completely serious introduction but it seems that this style is still considered as the Holy Grail of extreme music. And to justify this fact you only have to raise the question of the 10 best Black Metal records and the outcome would be for sure a list with more than a handful of Norwegian bands. If this hidden place would really exist SVARTTJERN had been for sure allowed to visit this holy shrine before they’ve recorded their debut “Misanthropic Path Of Madness”. From the first second it’s clear that we are talking about true Black Metal and this release is maybe a rare proof that the Norwegian scene has not completely faded into oblivion. It’s not only the playing time – again only half an hour including a 5 minutes “bonus track” – which is bringing the band in close contact to the ‘inventors’ of the term true Norwegian Black Metal GORGOROTH . So what is so special about this album after 20 years and the uncountable amount of underground releases? The most important fact is the extreme rawness of this album, a little bit like the KEEP OF KALESSIN debut over 10 years ago – you almost feel the pain and hatred which has been transferred into the 8 passionate songs. Especially the opener ‘Code Human’ with the brutal Satan chanting at the end is maybe more a statement than a normal standard song. SVARTTJERN has been founded in 2003 and their debut is a perfect example for a very good debut without the normal true underground sound. All instruments can be identified without problems and much more important are all instruments supporting each other to kill the last innocent virgin. These hungry wolves will seek destruction throughout Europe because we are talking – based on quality and attitude – about a more than an impressing debut. www.schwarzdorn.de, www.myspace.com/svarttjern