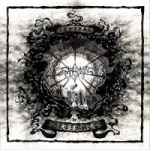 The spiked little Satan’s disciples in Norwegian SVARTTJERN (translates to ‘Black Tarn’ in English) have convinced the owner of Polish Agonia Records by their violent and malicious Black Metal – and as a result of this, SVARTTJERN’s first album on Agonia Records (second overall in the band’s own catalogue), "Toward The Ultimate", has now been released, to celebrate another victory for the band to wipe out all holy and Christian from the face of the earth. SVARTTJERN’s new collection of satanic and grotesque blasphemies on "Toward The Ultimate", makes your skin turning cold – having  this twisted ability to sound truly evil and hostile as far diving deep into their song structures – and exploring them layer by layer, are concerned. The overall performance of these infamous Norwegian icon smashers on this 2nd full-length release of theirs, is tight, really well-executed and giving them some credit as one of the better and more convincing 2nd wave of Norwegian Black Metal bands, even if their recipe of Black Metal doesn’t reveal anything new at all, which we couldn’t have heard before. It cannot be helped either that SVARTTJERN does have many of those same ingredients within their grim sound that make people somewhat easily comparing them to bands like MARDUK, MÖRK GRYNING, early IMPALED NAZARENE and especially DARK FUNERAL, which in my books ain’t a bad thing at all. What really matters in the end, is the kind of wholeness that makes one to return to an album – not just once or twice, but over and over again whenever you feel like being in the right mood for some tastefully done Black Metal. I think this is where SVARTTJERN have succeeded at; offering a really solidly made, well produced Scandinavian sounding Black Metal record to those parties that aren’t looking for so much of sheer originality and uniqueness from the bands they tend to listen to, and whose importance factor consists mostly of the actual feeling and vibe of the music – more than anything else really. "Toward The Ultimate" is more about the right feelings and vibes, and therefore I cannot do much else but recommend the album for the curious parties. www.thesvarttjerncult.com, www.agoniarecords.com