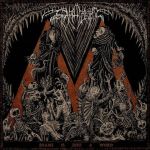 Oslo’s SVARTTJERN (consisting of members of CARPATHIAN FOREST and the ex – vocalist of RAGNAROK) have pretty consistently been active as musicians for quite a while now. Five albums in the past eleven years isn’t bad for multi-band members. Yet the quality doesn’t suffer. If you’re familiar with SVARTTJERN, then you know what to expect… a Black Metal band on the edge of destruction causing a ruckus in every town they wander into. Their fifth album “Shame Is Just A Word” is a solidly produced piece of work that fits in nicely with any band with staying power these days. The opening track ‘Prince Of Disgust’ doesn’t waste any time in kicking in the door and intruding into our home. The guitars buzz like a swarm of wasps, the drums thunder like a charging beast, the vocals scream and gurgle like a towering predator ready to rip our throats into bloody chunks. ‘Ment Til A Tjene’ is thrashy, blackened, fucking fabulous four minutes of sheer energy. Rain introduces ‘Melodies Of Lust’, a mid-tempo, yet heavy as shit, demolishing monstrosity. ‘Ta Dets Drakt’ is one of those songs you’d love to hear live in a tiny little dive where every step is a risk of tripping over a broken beer bottle while Metalheads surrounding you elbow you in the fucking face. ‘Frost Embalmed Abyss’ is a steady, fist-pumping track as ‘Ravish Me’ could easily be on the Metal soundtrack of an occult, orgy-infested b-movie. ‘Bonded By Blood is right out of 80s extreme Metal (originally by the mighty EXODUS – Frank) that leads into the title track ‘Shame Is Just A Word’, a throwback to everything we love about classic Metal, but with a Black Metal twist. Will SVARTTJERN turn the Black Metal world on its ear with a new way of looking at things? Nope. But dammit, they don’t need to. The band’s proven year after year that all they simply need to do is pummel us with their blasting, crushing, thrashing, pulverizing style of Metal that’ll leave you on your knees crying to the fiery gods below to return your fucking soul. For more info, check out www.facebook.com/svarttjern, www.facebook.com/soulsellerrecords