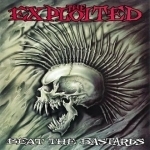 There was a time when Punk and Metal were in the same line: music for outfits, for rebels, that was loud and provocative. And, as many claim, in the beginning there was Punk and then Metal was born. I think that Punk added that touch of speed and aggression to the gloomy more blues orientated sound of early Heavy Rock. In this case, THE EXPLOITED has always been a band that is hard to define if it is metallic Punk or punked Metal. I would say that the first definition would be correct, as the lyrical approach and the vocal delivery, as well as the hair styles, as seen on what the cover art is depicted, pretty much sums it. So, metallic Punk was then later named Hardcore. Do not take this as a fact, but as an easy way to understand. This is a re-issue of the band 7th album, with an additional DVD with live footage from 2005 with no less than 27 songs (recorded in St. Petersburg). Although I cannot deny the importance of this band going on strong since 1979, and the fact that this is way heavier than many Hardcore bands, there is still a lot of Punk feeling here, and no matter that I am sure that without Punk, extreme Metal would not be, it is the case when I like what came after the evolution rather than the roots of it. Although I have heard this before, the felling is still the same, many songs have a very similar vibe, and the shouted vocals it is something I cannot really get into them. Still, as a re-issue, this comes as a good addition for those wanting to explore the roots of metallic Punk. For all additional info check out www.the-exploited.net, www.facebook.com/theexploited, www.nuclearblast.de