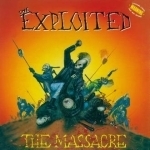 Another re-issue of one of the most notable metallic Punk bands from the UK. This was originally released in 1990, and it has a somewhat rawer and poorer production value compared to later efforts. There was a time when a Speed Metal fan could actually find some songs as quite in their liking, although I am sure the very characteristic vocals will surely turn off the ones looking for a rawer approach or a more melodic touch. There is something that the lyrical approach might be quite interesting, and that at least for me, it was more apt for the thing happening in the 90s rather than what we have today, although the same message still applies. Back in the 90s I had a good approach to metallic Punk, or Hardcore, and that included UNIFORM CHOICE, G.B.H., D.R.I. and obviously THE EXPLOITED. And I am sure that most of the Thrash bands from that era took a lot of influence on these people. As an historical document, this re-issue, which includes 4 bonus tracks, serves for the youth to know where Thrash Metal was born from. And for the fans, it is a chance to get this one again. www.the-exploited.net, www.facebook.com/theexploited, www.nuclearblast.de