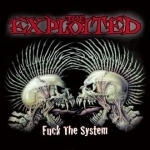 If there’s anybody out there who never heard this name: THE EXPLOITED is a legend in Punk! Always there for 35 (!) years, always controversial, but never defeated. Bazillions of releases, including eight studio albums, at least six live releases and countless EPs later, the living legend Wattie Buchan (vocalist) and his guys have found a new home with Nuclear Blast. As the first official act, they re-released the latest three studio albums of THE EXPLOITED, “The Massacre”, the fabulous master-piece “Beat The Bastards” and the still current “Fuck The System”. Well, not that current, since this album already has more than a decade on its back. But it’s still worth checking it out, since it represents anything THE EXPLOITED is, was and always will be. Fucking Punk that doesn’t care for diplomacy, but kicks straight between the balls. Wattie rants at everything he hates, no matter if it’s people in special or the whole system. Song titles like ‘Fuck The System’ or ‘You’re A Fucking Bastard’ are self-explaining. Musically, THE EXPLOITED spiced their fucked up, typical British simple Hardcore Punk with a dose of Thrash Metal since the late 1980s, giving their music a special note. Listen to songs like ‘Holiday In The Sun’ (no SEX PISTOLS cover, by the way) or ‘Was It Me’ and you’ll understand. In comparison to the predecessor “Beat The Bastards”, this album is a little more focused on the Punk roots of THE EXPLOITED. Sometimes “Fuck The System” even is damn close to musical rampage. Due to the recollection of the Punk roots, THE EXPLOITED 2003 reminded a little bit of the latest offerings from AGNOSTIC FRONT, who are as legendary and as indestructible. You want an album to show the world the middle finger with style, “Fuck The System” definitely is a good choice. But be sure to get “Beat The Bastards” straight afterwards. The recent re-release by Nuclear Blast has four more songs as bonus. You’ll get four classics from the earlier days, all of them from the 1987 “Death Before Dishonour” album, the first THE EXPLOITED album that used some Metal influences. If you need more info about a legendary band: www.the-exploited.net, www.facebook.com/theexploited or www.nuclearblast.de