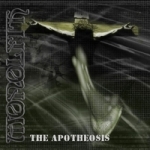 Even if I hadn’t read the band’s infosheet, I certainly would have been quite sure that THE MONOLITH DEATHCULT ain’t no newcomer to the extreme underground anymore. And indeed, the band consists of former members of the two Dutch acts ALTAR and DEAD HEAD, delivering a pretty furious debut full length here. Their label already compares them to NILE, but I don’t really see that yet, apart from the fact that THE MONOLITH DEATHCULT also do work with three brutal lead vocalists. NILE is currently simply a lot more unique than these four guys, who as of yet still can’t compete with the diverse songwriting skills of Karl Sanders & Co. Lyrically “The Apotheosis” is a concept album, dealing with the real story of Vlad Tepes the Impaler – better known as Count Dracula (which ain’t really the newest idea anymore), musically just very intense Death Metal, often rather close to Grind already, but all in all performed with a lot of technical finesse and class though. The main problem of THE MONOLITH DEATHCULT currently still is their overall lack of variety. They are mainly blasting through the material with full force, adding some crazy SLAYER soloing to it, but therefore ending up becoming rather monotonous and boring after a while (at least to me!). I always enjoy them a lot more whenever they incorporate a couple of slower passages (just listen to the great opening parts of ‘The Desecration Of The Black Stone’ – in an early DEATH vein – or ‘Der Kriegsmeister’, which comes up very SLAYER-like), as the riffing used for those particular parts is extremely cool and way more crushing than the highspeed elements which often tend to go nowhere. Some more of that would definitely help to make their next effort more balanced and exciting to listen to. www.monolith-deathcult.com, www.coldbloodindustries.com