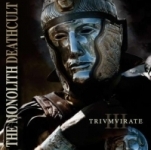 Third strike of this band from the Netherlands, and due to the name, I was expecting a brutal Death Metal assault all the way. On one part, I was correct for the brutal Death Metal part, which can be compared to early CANNIBAL CORPSE with a bit of early MORBID ANGEL, but then, a good dose of electronic sounds are combined into the music, giving this an almost industrial sound, specially the first songs. Think along the lines of early FEAR FACTORY and the few bits I have heard of bands like RAMMSTEIN, could fit the sound. Techno or industrial influences in Metal are not exactly what an old Metalhead is looking for, and lot less mixed with brutal Death Metal in sight… but they are wise enough to come out successful with this otherwise abominable mixture. Suddenly, more than a few riffs reminded me to those ages where the brutal Death / Doom / Thrash bands were dominant in the Netherlands. Well, they do sound a bit like those bands, like PHLEBOTOMIZED, BEYOND BELIEF and so on. The band is capable of creating eerie morbid atmospheres, that can be heard in such masterpiece as ‘I Spew Thee Out Of My Mouth’, which even reminds me of early THERION. The final result is a long album, with some great atmospheres created, with good growling vocals, a heavy production and although the constant use of keyboards / electronics might be too much for a few, there are surely some really great songs. The album closer ‘Den Ensomme Nordens Dronning’ clocking at 14:05 minutes, is one good example of how the band can try many different atmospheres and speeds in one long song, yet not doing it tiresome. By the way, in this one song I can listen to some similarities in style and composition with NILE, just to give you a slight idea. After a few listens, I would say that the last 5 songs of the album are the better ones, the use of electronics is kept a bit more in the back and the more brutal and direct style becomes predominant. A quite interesting album, of a band not afraid to dwell deep into the horror. www.twilight-vertrieb.de, www.monolith-deathcult.com