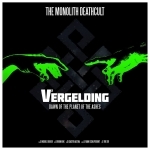 For those of you who never heard anything about THE MONOLITH DEATHCULT from the Netherlands, I can tell you that they are around for quite a while now. “V2 – Vergelding” (subtitled: “Dawn Of The Planet Of The Ashes”) is their seventh full length album and it is far from being easy listening. What once started as a brutal Death Metal act meanwhile turned into an electronica contaminated sound scape that reminds of soundtrack music played by Metal nerds. Thus the artwork of the CD is pretty well chosen, since it comes along in a A5 digibook that looks more like a DVD instead of a music CD. But the best packaging doesn’t help if the content is substandard. Well, THE MONOLITH DEATHCULT are not really substandard, they are just stuff that is much too demanding. The first real song after the intro, entitled ‘Dawn Of The Planet Of The Ashes’ really reminded me of the iconic FEAR FACTORY album “Demanufacture”, but the suspicion of cloning was denied with ‘Come Forth Lazarus’ at the latest. Somehow this one, as well as the other three songs of the original album (‘Fist Of Stalin’, ‘The #Snowflake Anthem’ and ‘Rise Of The Dhul-Fakar’), is much more a weird mix of electronic THERION, film scores, Death Metal and well organised chaos. Even after listening to it several times, I did not really get an access to the sound of THE MONOLITH DEATHCULT. After just five (not too long) songs, “V2 – Vergelding” is already over. But there is some bonus stuff on the disc as well, in the form of two songs from the album’s predecessor “Versus”, recorded live at the Graspop Metal Meeting in 2017. But neither ‘Die Glocke’, nor ‘The Furious Gods’ helped much with making my peace with THE MONOLITH DEATHCULT. These two songs reminded me of the remixes LAIBACH made from MORBID ANGEL songs, which still are not my cup of tea. In case you’re more open-minded towards electronic elements in extreme Metal than me, just check: www.facebook.com/monolithdeathcult