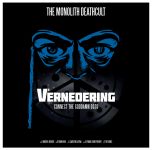 Well, this is my first time experiencing the Dutch outfit THE MONOLITH DEATHCULT. I’ve heard the name before, but it seems I was never able to sit down and give the band a proper listen, until now. Their latest output entitled “V3 – Vernedering” (which translates into “V3 – Humiliation”) is something else, so to speak. I was definitely not expecting this. First thing I noticed is how detailed and neatly crafted their music is. Which makes it really hard to pinpoint. “V3 – Vernedering” mixes a really heavy and dense wall of distortion with industrial parts, cinematic orchestration, deep growls, profound baritone-like and choir backing vocals and nice melodic parts, which ultimately makes this a really interesting listen. Is it Avantgarde? I’d say no. Is it Progressive? Maybe. Is it Atmospheric? Sure, it is. They do have a very solid Death Metal foundation with a big atmospheric influence. The grandiose feeling of these songs shows how much effort they put in composition, arrangement and specially in post production. The constant shift between slow segments and blast beat ridden parts and everything in between kinda reminded me of FLESHGOD APOCALYPSE, throwing in a good dose of HOLLENTHON and mixing in the mechanic and rigid sound of DEAD WORLD. So, at this point you are either really curious or you have stopped reading. Because that is how open-ended their style is. Production-wise, the album sounds sharp, heavy and simply humongous. The guitars are sharp and massive. And I absolutely dig the lead work. The bass guitar sound is clanking, but it has a huge bottom end. The drums sound a little stale from time to time, particularly when they slow down. But the double bass patterns are tasteful and hard-hitting. The orchestral parts work really well with other instruments, mainly piano and keyboard pads. Whoever mixed this album knew what he / she was doing, because with such an enormous amount of components, every single instrument is present, not conflicting with one another. The master is a bit too loud, but not tiring to the ear at all. Lyrically, the album has a lot of spoken-word, based around conspiracies, but applied to their own music. The sole mention of George Soros in their first song should give you an idea of where “V3 – Vernedering” is going conceptually. I really didn’t care about it to be honest. THE MONOLITH DEATHCULT’s sonic offering is brilliant and convincing. I don’t know if I like it or not. My opinion could change tomorrow for all that matters. But I am sure about one thing: if you want a rollercoaster of an album that takes Death Metal on a wild ride with a totally different approach, then this album will fulfill and surpass your expectations. So, if you got to this point, I advise you to listen to the title song ‘Vernedering’. You’ll know immediately what I am talking about. Go here to find more about the band: www.facebook.com/monolithdeathcult