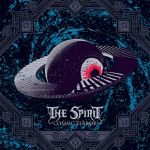 THE SPIRIT return with their second full-length “Cosmic Terror”. Their debut already brought them huge attention in the underground scene and was also re-released by Nuclear Blast one year later, which made the album available to a wider audience and also generated some pretty good tours for them. For their second release the band found a new home in Art Of Propaganda. ‘Serpent As Time Reveals’ already delivers the first hit of the album. The lead melody immediately drills its way into the listeners brain. The vocals are still very influenced by mighty DISSECTION while the guitars are heavily inspired by the melodic Death / Black Metal of the mid 90s released by No Fashion and Wrong Aagain Records without simply copying this ancient style. Especially the classic Heavy Metal / Prog Rock influences vary the music very much and show a matured songwriting. ‘Strive Of Salvation’ and ‘Repugnant Human Scum’ continue the started way. The aforementioned track has this intense 90s feeling and brings me back once again to a surely better periode of my life. Worth to mention is also the very intense drum-work, with breaks, blast-beats and very technical approaches overall. ‘The Path Of Solitude’ again starts like a hommage to Jon Nödtveidt and could easily have fitted on one of his first two albums. Especially the variations in speed make this track pretty enjoyable again. ‘Pillars Of Doom’ again is an outstanding track with intense songwriting and damn good drumming and a blood freezing melody and definitely is one of the best tracks the guys delivered so far as the middle part is pure 90s with its Jazz influenced guitars and bass-lines and nowadays even the old bands who return to the scene struggle to spread such a feeling. ‘The Wide Emptiness’ is another proof that they try to vary their newer material and sound with slow interludes and classic Heavy Metal tunes before the title track ‘Cosmic Terror’ closes the second chapter of the band’s young history. Again they carefully tried to incorporate some classic tunes before returning to their freezing cold melodies. Apart from the cover, which is not as well chosen as the original cover of the first album in my humble opnion, this second output is really a huge step forward and highly recommended for all Death / Black lunatics out there. For more info, please check one of the following sources: www.facebook.com/thespiritband, www.aoprecords.de