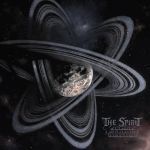 THE SPIRIT
Of Clarity And Galactic Structures
(AOP Records)
43:29min

THE SPIRIT, anno 2022 shrinked to a duo, returns with album number three, “Of Clarity And Galactic Structures”. I was pretty curious to hear the new material and already the title track, which opens the album, shows another huge development of the band. THE SPIRIT still honour the melodic Black Metal of the 90s, but finally perfected their own sound and developed their style into a more technical and even progressive direction. ‘The Climax Of Dejection’ surprises with some new elements and pretty much sounds like DEATH anno 1995, which is not meant negative in any way as this influence fits pretty well into their overall concept, and similar to THULCANDRA, this really helps to bring some fresh energy into their sound. Also a good doze of groove appears in the song structures and the technical bar has been put a stage higher again. And the classic Heavy Metal tunes do the rest. ‘Repression’ is another progressive track with some DEATH / CYNIC vibes, mixed with the ability to combine those with really memorable melodies. The last part somehow reminds me of VADER, when it comes to its Death Metal groove, before it gets paired with mighty DEATH again. And this development is really huge again. ‘Celestial Fire’, which has been released as a teaser for the album, is a another good example for THE SPIRIT in 2022, combining their classic roots with the new direction. ‘Transition’, an instrumental interlude, calms down the pace before ‘Timber Of Infinity’ returns to Black again. ‘Arcane Wanderer’ and ‘Laniakea’ also fit perfectly to an album which convinces with its overall concept. Songwriting, instrumentation, lyrical concept, production and cover artwork all have been done with huge devotion to Metal music and the album definitely is one of the top releases in this young year. I really hope now that the tour with THULCANDRA will be re-scheduled in 2022 as I really want to hear this material live. For more info check the following sources: www.facebook.com/thespiritband, www.facebook.com/aoprecs. Or simply buy one of the nice physical formats.