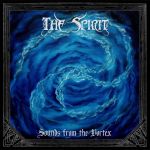 THE SPIRIT
Sounds From The Vortex
(Eternal Echoes)
38:02min

THE SPIRIT is a new horde hailing from Germany, worshipping the old bastard between Death and Black Metal which had its peak back in the mid 90s when the releases by No Fashion Records and Wrong Again Records brought fresh air into the second wave of Black Metal. Similar to THULCANDRA from Germany, their style is also very much influenced by the mighty DISSECTION and their first two albums. The opener and intro ‘Sounds From The Vortex’ already spreads this special atmosphere which enchanted my ears back in 1994, when I was listening to “The Somberlain” for the first time. I remember this moment and my feelings back than very well as this album, together with “Ancient God Of Evil” and later “Vittra” really changed my musical world and this lasts until today. Nowadays there are only a few bands, which are able to capture this special magic of the 90s and THE SPIRIT definitely are one of those. Together with bands like THULCANDRA, MORGON, ISTAPP and UADA, they manage to recreate this special magic and even if the first real track ‘Cosmic Fear’ is totally worshipping DISSECTION, they manage to sound quite unique anyway. Sure the vocals sound like Mr. Nödtveidt has crawled out of his grave to sing along with the guys but the song structures and melodies are really fantastic and well-created and there is no real weak song on the album. Highlights for me are the in advanced streamed ‘The Clouds Of Damnation’ and ‘The Great Mortality’ which both really cleverly use their influences but all tracks are far above average. The mentioned twin-guitar work is excellent, same goes for the powerful drumming and the vocals really nail it. This excellent output is rounded off by a really good album cover done by the German artist WÆIK bringing back impressions of Necrolord’s old works. Definitely the best release in this genre since UADAs fine debut “Devoid Of Light”. More Info can be found at the following locations: www.facebook.com/thespiritband, https://thespiritmetal.bandcamp.com