Like a phoenix from the ashes, THE SPIRIT crossed my way some weeks ago on Facebook with a taster for their first full-length abum "Sounds From The Vortex". When we received the album some days later for a review at our headquarter, I was more than happy to take care of it. But some questions about the band appeared and a bunch of them remained unanswered, so we took the chance to get in touch with the band to find out some more about their so far short history.

Hello Guys. Welcome to VFTD and thank you for giving us the chance to learn more about the band and its history. The material of your first album "Sounds From The Vortex" sounds really matured and spins in my car for several weeks now. Heavily influenced by DISSECTION and some other well known bands from the No Fashion / Wrong Again era from my point of view, what I really appreciate by the way. Tell us a bit, how you came together and how long you are active under the monicker THE SPIRIT. I guess that most of you are making music for a long time already. Was the obvious DISSECTION note wanted and planned like in THULCANDRA or how have you created the bands sound?
"Thank you. It’s nice to get some positive feedback after all the work we have put into this album. You’re right, some of us are making music for a while. This experience was very helpful to get the best possible result for our debut album. THE SPIRIT was born in 2015, when I found a capable drummer in MS. The other guys joined the band in 2016. It’s not our goal to create something completely new, which in 2017 is almost impossible anyway. On the other hand there was definitely no plan to sound like another band, not to mention to copy one. We just want to create good music by transforming emotions into dark sounds. I can’t deny that the result has a Swedish touch from the 90s. First, because we are influenced by Swedish Black and Death Metal bands. I mean a lot of very good albums came out back then. Secondly, we probably have a similar way to write music like some of the bands did back then. We don’t use keyboards or choirs to create a certain atmosphere in our music. Everything comes from good guitar riffs played with high passion." 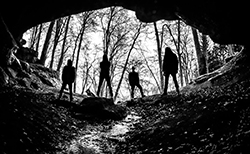 And indeed you really managed to create a unique atmosphere on the album. Have you recorded any demos before or did you go for a full album release straight after completing the songwriting? Can you tell us a bit more about the songwriting process and how you write songs nowadays? Do you rehearse on a regular basis or is all working out online which is more and more popular nowadays. Have you played many live shows so far?
"We had 3 demo songs online for a couple of months but we never released them on CD or tape. The only song which made it onto the album is ‘The Great Mortality’. We never have sent the demo to any labels or tried to spread it so I would say our first real sign of life is the album. Except one lead, I wrote all the music for “Sounds From The Vortex”. When I finish all guitars for a song, I sit down with our drummer and we start working on the drums. Very simple. We don’t send each other thousands of files with song ideas or spend months in the rehearsal room where you waste a lot of time because you can have 4 people with 4 different opinions. Before the album release we just played two shows. But I hope that people will now have more possibilities to see us on stage in the future. We’re looking forward to present the album live." 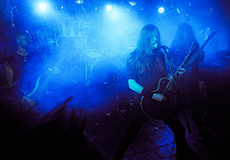 Your debut release was unleashed by Eternal Echoes, which were totally unknown to me so far. Can you tell us a bit about them, how you got in touch and what lead into the decision to release via them?
"Eternal Echoes is our own label. Right after the album was done, we have sent it to several labels, but not a single one was interested to release it (un-fuckin’-believable! – Frank). So we decided to found Eternal Echoes and do it by our own."

Worth to mention is the brilliant cover artwork by artist WÆIK, who did a fantastic job for this release. Can you tell us a bit, how you got in touch with her and who did the concept for this artwork?
"WÆIK has already a good name in the underground. She did great artworks for many bands and festivals. It was the right decision to work with her and we’re very happy with the result. She is a great artist and a very nice person to work with." 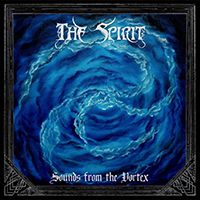 What are your future plans for the band? Any live shows planned ? What about the songwriting for any possible new material? Any plans with Eternal Echoes then to relase other bands or will you just leave it for THE SPIRIT?
"No, Eternal Echoes just exists to release the music of THE SPIRIT. “Sounds From The Vortex” just came out a couple of weeks ago, so it’s definitely too early to talk about any new material. Not a single riff is written yet for a possible second album and I guess it will take some time till we will start again with the songwriting process. We’re looking forward to unleash our cosmic terror on stage in the future. People will more often have the possibility to witness THE SPIRIT live in 2018 as has been the case in the past. So far there are just two shows announced but there’s more to come. Beware!"

Thank you so far for bringing some light into the young history of THE SPRIT, who surely made it into my personal top ten for 2017. Any last words you want to pass on to our readers?
"Thank you, so far. A lot of good music has been released in 2017 so it’s quite a compliment for us. Thanks for the interest in THE SPIRIT, hope to see many of you at our upcoming shows."