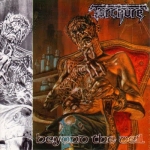 Vic Records is digging in the 90s Death Metal history for a while now and after re-releasing some Dutch underground stuff Roel van Reijmersdal has now exhumed a real masterpiece of German underground Death Metal. TORCHURE from Uelzen / Lower Saxony were one of the early bands around and started already in 1988 inspired by the Thrash Metal movement of the 80s. Later they included influences of the upcoming Death and Doom Metal movement in their sound. After 3 demos they finally released their debut "Beyond The Veil" on the German cult Metal label 1MF Records and this highly sought-after release is now brought back to us by Vic. This release of early 1992 is a pearl in the German Metal history. Inspired by Thrashers KREATOR and SEPULTURA and US Death Metal similar to early MORGOTH, TORCHURE played an enjoyable mix of Death and Thrash Metal on some tracks. On the other hand, there a tracks influenced by the early Death / Doom movement like CATHEDRAL or ANATHEMA with spoken lyrics and fine keyboards and slow doomy guitars. All these influences have been mixed up to an unique style by these young, talented musicians without sounding like a copy. The production is very good and all instruments can be heared clearly. All songs are on the same high quality level, still sounding fresh and unconsumed after 21 years and it is easy to listen to it 2-3 times in a row. For Fans of MORGOTH or MERCILESS or anybody interested in the German Death Metal underground a must have. Vic have added 2 bonus tracks from the 1991 "Traces" demo on it together with liner notes and the original cover artwork. www.facebook.com/pages/torchure/124843611008933, www.vicrecords.com