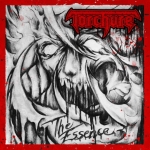 Germany is one of the greatest countries overall. Lifestyle, entertainment, culture, music and above all Metal. You can listen to 1 band (new or old) each day over 5 years without repeating a single record and all of them will have something to remember, a trademark. Talking about remembering and trademarks, the landmark set during the early 90s speaking about classic Death Metal was very prominent in Sweden (that’s a known fact) however Germany had some great bands playing in the same vein of GOD MACABRE, EXPULSION, PHLEBOTOMIZED etc. That gloomy heavy and hypnotic sound in Death Metal was a trademark sound, and one of the bands from Germany carrying this sound perfectly was TORCHURE. While their debut album showed a more brutal and direct approach to classic Death Metal, their second album “The Essence” is something so unique and special, those kind of records that usually happen only once a year. I know it’s very difficult to explain how a classic record sounds without recurring examples or references to other bands… Well, this record sounds like ASPHYX slow parts, with the melodic MORGOTH passages mixed with the creepy atmosphere that bands such as early MESSIAH, MERCILESS and POSSESSED had during the early days. They even have some twisted way of playing with cut rhythm sections and uncommon drumming patterns reminiscent to AFFLICTED and FURBOWL. But the most important thing here is that the basic sound is pure and unpolished Death Metal. You can hear some low growls and mid range vocals which give a dynamic feel to it. This gem was very difficult to buy back in the 90s and was heavily searched by old school fans over the world that ended up buying it at outrageous prices just to get a hold of it. But Vic Records (once again) saved the day and protected our money by re-releasing this classic album including 2 hard to find bonus tracks coming from the “This Stuff’s 2 Loud 4 U” compilation from 1993. Do yourself a favor and buy this record, it’s something unique, something twisted and a great listen. You can buy it and get more info about how to order it here: www.facebook.com/pages/torchure/124843611008933, www.vicrecords.com