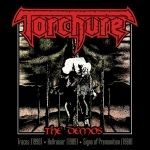 TORCHURE was destined to be great… destined, but fate was in sight and they lost two members of the band in a tragic traffic accident. Maybe one of the first to have that info was Oliver, their manager back in the day, with whom I was corresponding with. I got from him the demos, CDs and vinyls of their debut album which I still have in high regards now. They went on to record another record to then call it quits. Here, in this fantastic compilation we have all their demos previous to the albums ("Traces" from 1991 and "Signs Of Permonition" from 1988), plus some live tracks (of a show in Essen, Germany 1992) of this killer Death Metal band. Their beginnings in 1988 were probably more along a Death / Thrash style, think of demo band MALEVOLENT CREATION or a thrashier MONSTROSITY in style. Some rehearsal tracks (with a good sound for being a rehearsal) are also found here (the "Hellraiser" rehearsal tape from 1989) and they were slowly turning into a more deep Death Metal band, with traces of OBITUARY, DEATH and POSSESSED, yet also with touches of evil Thrash in the deadliest KREATOR and SODOM vein. Something that can be heard in one of the best Death Metal demos ever released, "Traces". A fantastic production and a killer delivery of Death Metal with some Doom / Death Metal touches which came out as a mix between DEATH, PARADISE LOST and SLAYER. I also think that their vocalist is truly one of the best Death Metal vocalists ever with truly an agonizing voice. It was a shame that they only lasted for two albums. This is a killer compilation although some songs repeat in some recordings, just the "Traces" demo is worthy alone of having this one. Kudos to Vic Records for releasing this one. More about TORCHURE at: www.facebook.com/torchure-124843611008933, label contact: www.vicrecords.com