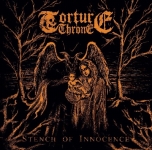 2nd release by Normandy based TORTURE THRONE! It took them close to four years to strike back after their debut release “Thy Serpent’s Cult” (2010). Well their formula of Death Metal has not changed that drastically, since you still hear their dedication to the classical Scandinavian styled HM2 distortion pedal drive. Generally I think that TORTURE THRONE became more gloomy and atmospheric with this MCD. It reminds me much more of FUNEBRARUM or 90s Finnish bands like DEPRAVITY, old SENTENCED than of the typical Stockholm style. The French quartet is doing best, when thy try to conquer the doom and moody spheres in their music by adding some really dark melodies as well. They know how to varify their compositions, even by adding some small hidden INCANTATION style reminders. The biggest point of criticism to me about “Stench Of Innocence” is that I truely miss the essential kind of catchiness, especially in the vocal department. It sounds brutal and well exceuted, but I miss catchy verses, cool chorus parts etc. – simply those essential earworm elements that you wish to discover from a release on the first rounds of listening. Furthermore I think that the drums sound a little bit static in their arrangements. The production is heavily based on upfronted guitars and vocals, still transparent but a sort of dynamic is missing. Don’t get me wrong; it’s a decent underground Death Metal release that works really well in the roster of Obscure Domain Productions. You reek the dedication TORTURE THRONE have for this sub genre of Death Metal, but the major problem is that in the past four years since their last release this style expanded so much and there was a true sort of death explosion with bands worshipping that style in a deadly and some of them in a even deadlier way than those French deathheads do nowadays. The release comes along with a well fitting coverartwork. Obscure Domain take care of the CD release, the vinyl version is out on Forgotten Wisdom Productions! For more info check out www.facebook.com/pages/torture-throne/126973587350308, www.obscuredomain.com, www.forgottenwisdomprod.com